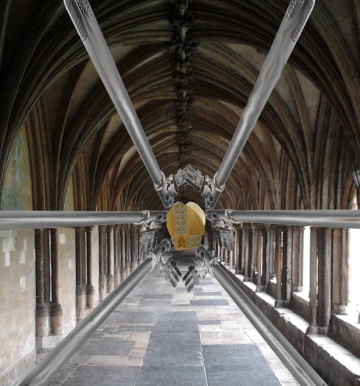 Cox’s Large Hadron Cloister may cause a black hole into which the Church of England may disappear without trace.

An unlikely solution to the stand0ff over women bishops emerged yesterday following the unexpected intervention of Professor Brian Cox.

The particle physicist, despite being an ardent atheist, agreed to come to the Church of England’s aid for the sake of science. Following his work at CERN, Cox has now developed  a Large Hadron Cloister at a secret Cathedral location in the UK (pictured). Whereas CERN’s celebrated Large Hadron Collider was devised to explore miniscule particles of energy such as the Higgs Boson and Shatner’s Bassoon, Cox’s new apparatus is designed to solve the General Synod’s knotty problem of female episcopal oversight by creating Schrödinger’s Bishop.

“It’s amazing nobody has thought of this before,” explained Professor Cox, “but by devising an experiment in which a female priest is placed with a mitre, an Archbishop and a crozier in a sealed box then bombarding her with subatomic particles, using the Copenhagen interpretation of quantum mechanics, we could create a female priest who is, simultaneously, a bishop and not a bishop. Just as Schrödinger’s cat was both dead and alive until the box was opened, the priest is both a bishop and not a bishop until the box is opened.”

However, opponents of women bishops and human rights organisations have rejected Cox’s plan. The former claimed that even a Schrödinger’s bishop would be unacceptable to them as the Archbishop concerned would be tainted by his possible consecration of a woman. The latter were more concerned by the lack of airholes in the box.